A teacher who is an employee of Trnava University in Trnava and their workload exceeds 18 hours a week is entitled to hold ITIC, an international teacher card.  The card is issued by a smart card centre administrator (SČK) after recording the applicant´s personal data into the information system SOFIA- human resources (in line with Art. 4 (8) of Rector´s Directive No. 3/2004). The card applicant subsequently arrives at the smart card centre, where a digital photograph of them, which is going to be used on the card, is taken.  The price of card including ITIC licence is 15.00 €. The payment for card is settled by a deduction from the card holder´s salary on the closest salary date after card issuing.

Validity prolongation of ITIC teacher card is executed by an update stamp whose validity lasts 16 months, beginning on September 1 of the current calendar year and terminating on December 31 of the following year. The price of ITIC update stamp is 7.00 € and can be purchased from the smart card centre administrator during office hours. The payment for stamp is settled by a deduction from the card holder´s salary on the closest salary date after update card selling. 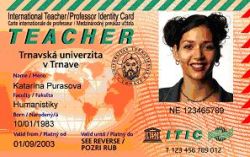